The ride into Turkey was generally more relaxed than the previous couple of days.   Through Bulgaria, despite the hilly terrain, we’d covered the distance spurred on by the desire to find accommodation and a shower. The 50 km needed to get us to Kirklareli wasn’t going to be a problem, although the Turks’ fine new road was pretty bleak, bypassing the few habitations in this range of hills.  We’ve discussed  finding some shelter to sit out the hottest part of the day but never quite manage it.  On the one occasion we did, boredom set in very quickly. Well, it was in a highway drain.
Having arrived in Kirklareli, we were focused on dodging the traffic and failed to notice the two hotels behind us as we asked, in the local police station we were passing, if they could direct us to a hotel.  The language barrier has got wider the further east we have come. It’s no longer the case that a number of people will speak English.  At the time we didn’t know how to use Google Translate offline, though we did later..  It was the same with the policemen.  They could muster a few words of English between them, we still hadn’t got the phrase book out.  They leapt into a car and set off with  us trying to follow and dodge the traffic.  They had certainly taken us to a great hotel but it was way beyond our budget.  Garmin saved the day in its local search… pretty much opposite the police station!
Kirklareli is an energetic town throbbing with people and activity.  A quick scan on Wikipedia said there were things to do, and it should be a great place to explore.
We were quickly out and about keen to find some supper, that’ll be kebabs in the street then; but we must have had tourist mug written across our foreheads because there was no menu with prices on it.   We were charged an outrageous 50 lira when it should have been less then 30.  We’d failed to follow the advice on line ‘ check prices first’. We’ve got a bit more savvy thereafter.

Bread available to purchase outside shop

One of the many street traders

National costume
First errand in the morning was haircuts and a shave. And this might already have made us look less weird. Gid bought a cheerful cotton shirt, and provided he avoids the combo of shorts and big boots, is probably less of a sore thumb in the streets now. Clare, however, still looks vaguely military. 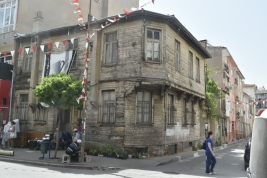 One of several wood clad or wooden houses

Not many buildings are falling down but this is quite spectacular 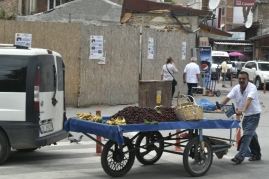 In the mix at the roundabout

View down a street 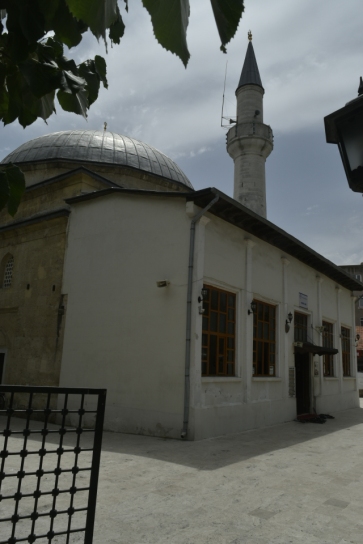 Gid’s phone photo lousy image quality
Since then we’ve visited Hızırbey Cami mosque. This was a stunning experience mainly because the Imam encouraged in, told us about the history of the building being linked to the early Ottoman empire, being founded by Osman 1, what the symbolism meant & donned his robes for our photo call. A fantastic welcome to our first Islamic country.
Still on a high from that we gathered our stuff and went for a Turkish bath in the towns second ancient building with an early Ottoman origin. 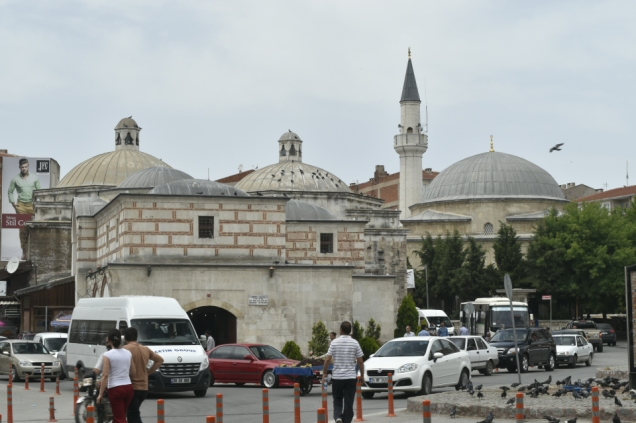 The last of the days events was people watching.  The roads have very little in the way of lines demarking rights of way. As I sat and watched a busy roundabout with 5 exits, I marvelled at how traffic: bikes – occasionally 2 up, motorbikes – sometimes 3  up + shopping, buses, cars, trucks etc. people & dogs all interwoven.  It seemed to stay fluid with everything using the same navigational routes.  It really was amazing to see people in this mix taking their turn in amongst the traffic, not to mention the dog whose water was thoughtfully placed in the centre of the roundabout.
All this is punctuated by the regular reminders blaring out from mosques to go and pray. There also seemed to be a city centre tannoy system, we didn’t figure out its purpose.