Cycling across these rural, untouristy areas it was common for the menfolk to invite us to join them for cay. Increasingly small groups of younger kids would come up as well, try their English, and poke and prod the strange bicycles. Turkey’s harvest, and thus school holidays, are earlier than in the UK,  and in many places we could see parents delighted something was diverting the kids. The kids are often pretty adept with Google Translate! They showed me how to enter Turkish characters that my EN keyboard doesn’t show.

Saris is a small town and probably only has one otel. The old chaps on the street corner called the otel owner and then insisted on cay, which absolutely wasn’t a problem. The otel owner ambled across the road and soon we were in the small, simple but very good value Otel Hilal, especially nice breakfast. We set off reckoning on another garage camp. However, the road proved especially arduous, very steep, especially the first few km from Sariz seemed to go straight up. The locals had warned us about this, and contrasted the twice-as-far southern route. We weren’t the only ones to struggle with this road – see the picture of a tuck that had been coming down before we got there. The picture does not show the 60 degree slope the other side of the crash barrier – they were lucky to be alive. The route was also mostly barren of supplies, even water, until near the end. Just before Hurman Calesi, we stopped at a riverside picnic area, and met a big family of friendly Turks, all travelling in Dad’s small lorry. The younger ones were really intrigued by the bikes, and filled our bottles from the clear stream that ran through. A few miles further, and we finally found a village shop. Although goods for sale were limited, they pampered us with extras… Tasty chickpea treats, salad leaves, ayran, watermelon, and of course cay. 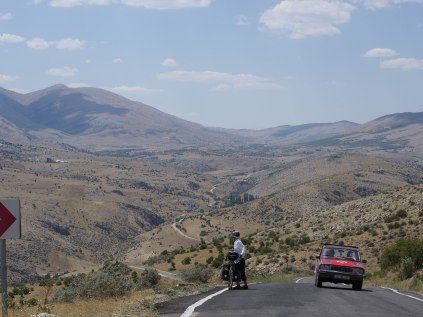 The hills riding to Afsin were savage, it was hot, and few provisions available. Spot the post-coup flag on the bonnet of the typical rural Renault 12.

Near the top of the climb out of Sariz. Crew were collecting dripping diesel.

Another hill before Afsin 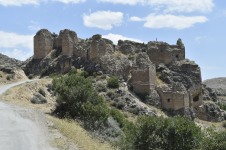 Getting towards Afsin, we decided we were too tired and dirty to rough or garage camp, and to seek an Otel. Going directly to the busy town centre, we quickly found…. Oh, that’s going to be pricey. We pull over opposite, and get out phones, but as usual in Turkey, a guy pops up willing to help. There’s a bit of miming and phrasebooking. Another guy appears, speaks some English. We’re in luck, he’s a teacher! We follow his car a short distance to the teacher Hotel, he checks us in and we chat for a bit. Although only separate single rooms are available, it’s comfortable and very good value. As evening turns to night,  the town seemed to be having a bit of a party that night, lots of noise, hooting (pretty normal in Turkey) and maybe…. Guns fired into the air?

Next morning, early, Clare shows me a message from her big brother: “you’re in a coup!”. A look online, and yes, Turkey has had a coup attempt. It seems to have failed. At breakfast, and around the lounge television, older folk are tense. We check the UK foreign office advice, it says “stay in”. There’s no problem staying another night, so we do so. An enforced rest day results, so the blog gets more content! We also spent some more time replanning, of which more below. Gid nipped out for a few errands, including a beard trim, but otherwise we stayed in until it was time to find dinner. At which event, things seem normal, except for the young men parading on scooters and cars, blowing horns, playing load music, and, especially, waving Turkish flags.

Sorry – no photos – we though it rather unwise to wield cameras in the circumstances.

Next morning, online advice is things are pretty much normal, so off we go…. Due West. Because everyone in the town said “you must go and see the Seven Sleepers”. This is a legend common to Islam and Christianity,  and others too. Unfortunately, although Afsin seems to be recognised (eg by UNESCO) as the likely location, other claimants are much more dominant online. Local directions were vague… Eventually we found out enough to set off.

Eshab-i Kehf was 5km West, all uphill, and the last bit steep. A mosque is built around the cave, and complex of other old buildings around that. Before the mosque there was a Byzantine church. It was interesting and peacefully lovely, a few other Turkish tourist and staff there, friendly and helpful and keen on sharing photos. 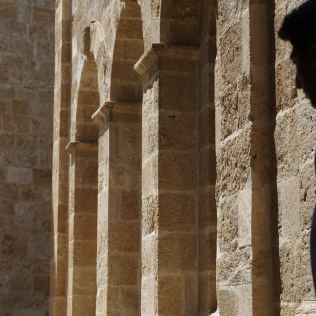 Eventually we had to come down and we set off eastward about 11.

This was a minor main road. After 20km or so to Elbistan, it was single carriageway and very quiet. There was quite a bit of flat, but toward the end of the day, a big climb. This took us up onto a relatively flat plateau, largely rough grass and rocky bits. It was a bit reminiscent of an upland Scottish moor, but drier and hotter. Then, the road dived down a grassy, scrubby, rocky valley which resembled a Yorkshire dale, except for the large, flat roofed houses. And the heat. 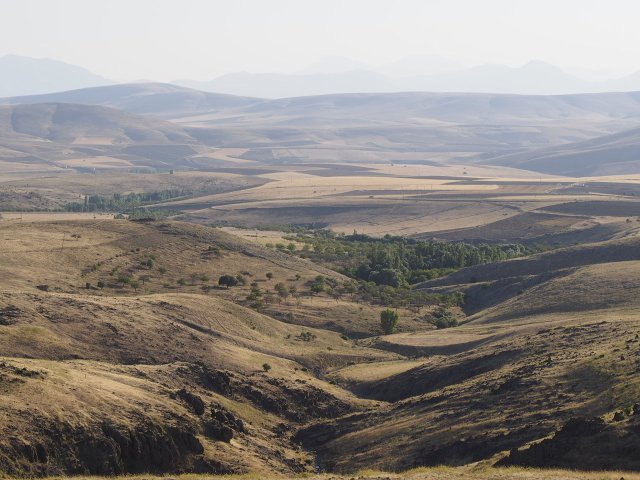 Just west of Darika, scenery resembled England’s in some ways.

The problem with this road, we’d suspected from the start, was it didn’t really go through anywhere, and was too long, with its hills, to do in one day. We didn’t fancy rough camping with the country so nervous. We decided to go on as far as the first garage the navi indicated, and try our luck there. We expected – without reason – a typical Turkish main road garage, which in UK terms, is a small service station, standing alone, or several together. The generous spacing means there’s usually room for our tent, and the restaurant means they can sell us dinner. It turned out to be a small petrol station and various small shops and a small restaurant,  spread out along the dual carriageway, hemmed in by a steep slope. Anyway, we asked about, had a meal, bought supplies, asked a bit more… We could camp on a rough patch of gravel at the end of the village very near the road, this looked uncomfortable and unsecure. Or, we could kip on the floor of an office at the end of the row.

We chose the latter, it was fine, especially as it had its own toilet. We felt a bit awkward, because we’d definitely been scrounging, but we really we getting a bit desperate. We did offer to pay, but this was declined. We were settled in by the owner’s sons Oguzhan and Mevlut, and Google Translate. The shops closed at 11:30, and the shop owner, Durmus, then called by to ask if we’d prefer to move to his sitting room floor? But we were already comfortably camped, and Clare sound asleep.

In the morning, Durmus declined Clare’s attempt to buy provisions, and invited us in for breakfast. The flat above the shop was large and cool,  compared to England, less furniture and much nicer carpets. Breakfast arrived on an huge tray, and we all sat around in a circle on the carpet and ate. We were impressed how much of the many cheeses were home made. It really was a lovely start to the day. 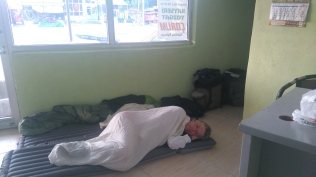 Just as well, as again, there was a fair bit of climbing, as so often, on a broad, lightly used, dual carriageway. But after maybe 30km, we reached the plains of rich agricultural land around Malatya, and had a smooth run in to our biggest city since Istanbul, passing mile after mile of the famous apricot orchards.

Apricots drying in the sun on the way into Malatya.

Malatya wasn’t on the original plan. We’d envisaged going further south to historic Nemrut area. But at detail planning stage, we realised Nemrut by bike would consume many days to get in and out. The roads hairpin their way about 100km of steep mountains. So we cut out the Nemrut loop, and Clare fixed us up a motor excursion, from a 2 night stop in Malatya. The excursion has its own post.

We stopped in the hotels area in the city centre, intending to search around for a cheaper sort of place. But it’s a tough year for tourism in Turkey, and the staff ran out of the nearby Kent hotel, almost dragged us off the bikes, and agreed to our budget. Err, ok. And very comfy we were too. We would have been even comfier if someone hadn’t mistaken the AC remote for the TV, and tucked it out of sight. Malatya isn’t an intensive tourism centre, but it is a good centre for historical visits, and at least the hotel sector is feeling the effects of the abuse Turkey is presently suffering.

Malatya’s hotel area is very central, and the post-coup political rallies in Turkey are noisy, festive, but slightly intimidating affairs. Both nights we were in Malatya, people rallied in a central square just the other side of our block, lots of noise, speeches, chanting but didn’t stop us sleeping one jot. Again, no photos of this, sorry!

Now, confession time! At the same time we realised Nemrut by bike wasn’t practical, we confirmed we were running late, in terms of the timing of our Azerbaijan visa. Then the attempted coup underlined how Turkey is presently a bit tricky security-wise, especially in the south. So as we’d long thought might happen, we used public transport to speed things up, taking an overnight otobus to Tatvan, three or four days ride East. Even with some 90 minutes delay, this dropped us off about 4am. We then had an easy 65km alongside Van Golu to Adilcevaz and a Pansiyon.