The big bus dropped us off in Tatvan, at the western tip of Van Golu, at about 5am.

From there we cycled to an early stop at Adilcevaz. A small town trying to make the best of its scenic lakeside situation.

The next day’s ride took us off the north-east end of the lake to Muradiye. We stopped on the edge of town to ask a man in a van where the centre or an “oojooz otel” might be. He turned out to be a policeman (yes, that is a holster!), and promptly led us to the town’s teachers hotel, for another comfortable yet economical night.

For a while now a few people have been saying cycling in Turkey is dangerous.  But then so is cycling in Romania, India, the Stans and numerous other places.  It’s been difficult to ascertain why!  Firstly, it was Zoe and Adrian, who were selling their bikes in Istanbul and flying across Asia & going to continue their trip by hitch-hiking round India. Secondly, there was the man from Istanbul who thought we were mad cycling in his city but didn’t mention else where in Turkey.  His concern was linked to the drivers. However, Secil, from the bike touring store in Istanbul, advised us to take the southern route through Turkey so that we could enjoy the sights with no mention of any problems. And indeed, away from Istanbul and especially it’s developing third airport, traffic has been light and the roads feel safe enough.

We’d also done our research on the British Government site too, checking where it was ‘safe’ to go but this info., although explicit in saying where we needed to avoid, did not expand on the information and give reasons. We had assumed it was linked to the Syrian troubles as the restricted areas are down south near the border and we’ve seen more and more refugee camps – all small – as we have travelled further south. So we had fast tracked, by intercity bus, out of the strip of Turkey that was between the marked problem areas on the UK site. Safe, we thought.

Ramo, our guide in Malatya, advised us not to go near Agri, north east of Malatya,  because of trouble there but again, he didn’t say what kind of trouble. That swayed our decision to go further east & up the main road avoiding this town altogether.
We arrived at Muradiye, happy that we’d done the first part by completing the eastward section, and now we would be turning north. However, standing at reception of the teacher’s hotel, a man in hospital theatre clothes said, ‘Why are you here? Don’t you know what’s going on here in Turkey?’  I replied rather lamely, yes I did know what was going on in Turkey, overlooking the word ‘here’ , assuming that he meant in Turkey generally, and the attempted coup, as opposed to this specific area.

We set off the following morning, with a couple of sight seeing spots to visit on the way, in mind.

Having done the visits and got the photos it was nearly lunch time.  We stopped at the next town, Caldiran, to get some provisions.

While Gid was getting our lunch time feast, an off-duty policemen came and asked where we were going.  I showed him on the map.  His response was, ‘It’s over the mountains, did I realise it was over the mountains’.  His English was very good so I joked saying, of course it was over the mountains, you can’t get anywhere in Turkey without going over mountains. He then explained that there was active guerrilla warfare in the mountains we would cross.  He carried on to explain that we would be fine.  They weren’t fighting tourists but don’t stop!  If someone tries to stop you or talk to you, we must keep going and not stop. This he stressed several times. It’s not clear if our 5kph uphill speed counts as going or stopped. The trouble spot was 25 km away, he’d  said. We would see soldiers on this route but that was normal, so not to worry about that.  If we had a problem phone 155.

We didn’t manage to swallow much of the lunch.  The pass reached an all time high for us at 2644m, but we took very few breaks, anxious to keep going.  It’s amazing what adrenalin can do. At first we saw a watch tower high on the eastern hill top.  This we now think may have been the Iranian border.  Shortly after, we passed armed soldiers  perched high up on an out-crop on the western side,  who, like everyone else, called ‘hello’ and waved. Thankfully, although in two places the road was constricted, presumably to facilitate road blocks, there was some traffic on the road which felt reassuring. So, not many photos from this spectacular ride… 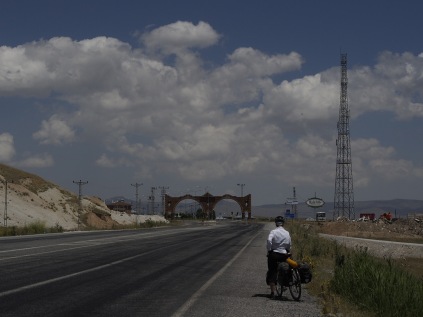 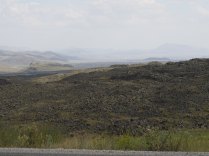 Farmland up near the pass

Ararat over valley farmland
As we passed through the higher part, the more immediate threat seemed to be dog attacks.  We’ve had a few weeks of peace from dogs but today they were back with a vengence.   The dogs, singularly, in 3s or bigger groups, didn’t get any closer than a metre or so away but that was far too close as they ran at us, often wolf sized and baring their teeth. Finally, Clare had enough and jumped off bike , grabbed her dog stick and went on the rampage.  This seemed to do the trick until the next lot arrived on the scene, game for a chase. These were not random dogs, each mini-pack was associated with a small flock of sheep and, usually, the small boy or boys in charge. When there was an adult shepherd, we didn’t have a problem.
The children, at times now, rather than just being keen to wave and say hello, are begging: “money money, money”. Well the boys do, not girls, but in this part of the world it seems to be the 10 year old boys who are out and about.  This was worst in the high pass, and got better as we descended, but it was capped, as we arrived at Dogubayazit, when two lads started off begging then progressed to persistently hauling on the backs of our bikes.

After a nights sleep we were determined to keep a balanced outlook so decided to visit the tourist sites just out of Dogubayazit.  The Ottoman – Ishak Pasha Palace,  built in 1700, was spectacular.  No need for bikes, a dolmus was only 2TL each, each way. The over looking castle was curious as it seemed to be a wall, with occasional towers , around the mountain top, with nothing inside, but climbing up it gave spectacular views of the palace.

There were quite a few visitors, but all appeared relatively local. We got there in a moderately crowded dolmus. The top carpark was largely used for picnicking and Bbqs. We really did seem to be the only exotics, although we saw a French registered car there too, but likely the owner was a Turk who lived in France. 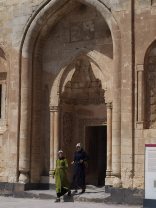 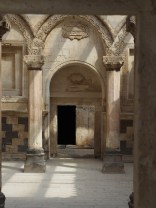 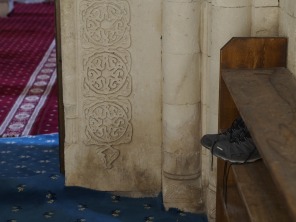 Ishak Pasha Sarayi – Is not small 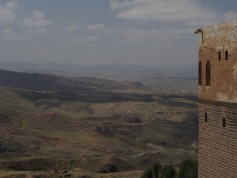 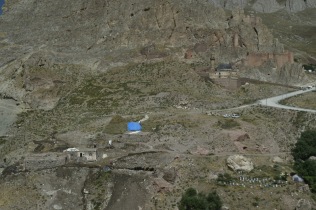 While there, we very definitely heard automatic-gun fire coming from the mountains. On returning to our hotel we rechecked government warnings. The UK website was still the same – we were safe! The New Zealand site, on the other hand, was more cautious and gave specific towns, a number of which we have passed through, as well as saying all of Turkey was high risk and to be avoided. Hmmmm.  We decided to visit the local police station which is currently behind barricades, with armoured vehicles with guns on top, parked at the front, 50 odd metres from our hotel, for further advice.  They were quite explicit that we should not be cycling in this area and were prepared to accompany us to the local bus station to help arrange bus transport out.

This we did the next morning – dolmus to Igdir, then a mini-coach to Kars in north east Turkey.