The Pamirs, a highway across the ‘roof tops’ of the world, a dream destination for well ‘ard cyclists that had been on my wish list since Gid gave me a 501 must do trips book for Christmas 2013 and there, together with the Karakorum Highway, it was. Then he gave me the Adventure Cycle Touring Handbook for Christmas 2014 – was there a plot?

We took far too many pictures! The area is both photogenic and varied, and, we had loads of time for photography. Even half of our pics is blog-bursting, slow to edit and view. So all the pictures below are Clare’s. Gid will make a separate posting for his photos.

I had nurtured my dream, but Gid was more in touch with reality and had realised we wouldn’t be able to do it quite early on in our trip.   Something to do with my groaning and state of depression when faced with endless mountains.  I had kept on trying to convince myself that I would miraculously: shed half the weight on my bike, toughen up both mentally and physically, and fit large mountain bike tyres to cope with the dirt road conditions, by the time we reached Dushanbe.  Not to mention the further difficulties such as the likelihood that there would be snow and very few places to get drink, food or shelter along the way. The advice, also, was to take two to three weeks to acclimatize before attempting any strenuous exercise at high altitudes and time was running out.
As mentioned in an earlier blog, we went to visit the CBT office to see what was on offer as a possible excursion around the Bishkek area having been told that the Pamirs were off the cards – this is Kyrgyzstan, they wouldn’t be organising or promoting trips in Tajikistan.  A three day hunting trip with eagles was very attractive, well, to me at least, but nothing really hit the spot so I thought I’d drop the Pamirs into the conversation.  At that point there was no looking back. Eye wateringly expensive with just two of us in a 4×4, it could all be organised from Bishkek.  At least we already had Tajikistan visas…
A flurry of activity ended up with us in a shared taxi – 11 hrs, two snow covered passes and numerous dodgy overtaking manoeuvres later we were in Osh, the starting point for the Pamirs from the eastern end. 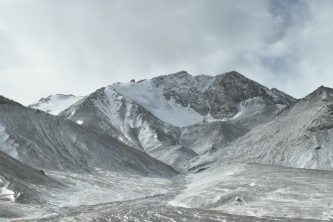 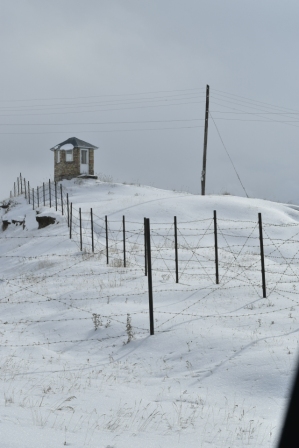 A typical cooker, Karakul homestay
In Osh we met Baktir, our driver, who made us very comfortable from the start. His broken English was enough to make some conversation and he ablely informed us of the sights and some historical information 0nroute .   Equally, he readily stopped for us to visit and take photos at major sites, and whenever we asked, although we frequently snapped away as we went along.  It was only when snaking down a mountain road into the Wakhan Valley with Baktir peering out across his left shoulder that I started to panic about cliff edges.

The central plateau of the Eastern Pamirs is classified as desert due to the lack of rain. Temperatures, Baktir told us, can drop as low as -40/50C but generally it will only snow in January or February – true enough it was brown mud/rock mountains unlike the snow covered passes and mountains we’d seen earlier, especially north of Osh.  This didn’t stop the ‘sheeps people’ who live in the mountains and have permits to cross into China to access ‘pastures’ for their sheep and goats, from being there.  Together with the ‘sheeps people’ were the yak people.  Some yaks wandering freely; others were vaguely linked to a village while some, miles from anywhere, were with a herdsman. Cattle, chickens, horses and donkeys also roamed freely or at times with a herdsman. Sometimes the herdsman was on foot, sometimes on a horse, sometimes on his mobile. The prized Marco Polo wild sheep, although occasionally near the road side we were told, where nowhere to be seen.  This, to me, wasn’t surprising; despite being a listed endangered species they are still hunted in the area by wealthy tourists – and probably hungry locals.

The Pamir area is huge, but has a tiny population. Down in the deep river valleys on the Afgan border,  the climate is mild; grain, vegetables and fruit all grow, as well as keeping livestock. These areas looked more prosperous, although large numbers of working age men at the roadside testified to a significant employment problem. Up on the higher plains everything looks much worse, and indeed, Murghab is about the poorest place in Tajikistan, which is itself a very poor country. Wikipedia’s Tajikistan entry is not up to date but reported, in droughty 2015, imminent famine conditions in the Murghab area.  This would have greatly  affected the population of 4,000; probably the largest town in the eastern Pamirs.

Think it used to be a Moskovitch. Murghab.

Hanging the washing out

Letting the sheep out

One of the shared facilities 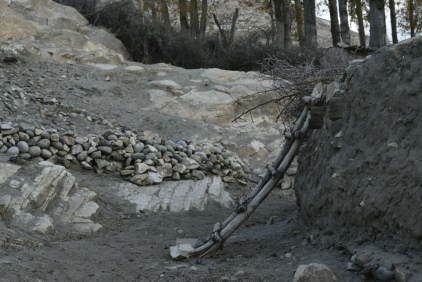 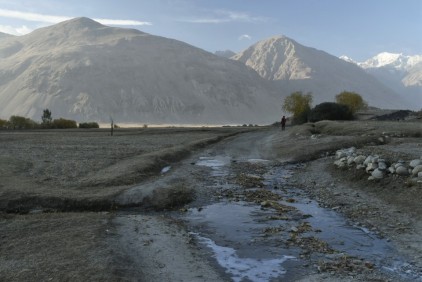 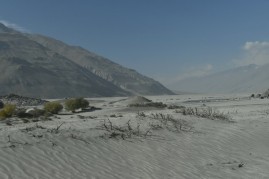 Rush hour
There were many highlights along the trip.  The numerous snow covered mountains were truly breath taking but for me the sight of a caravan, all be it of horses, was truly awesome.  As always, yesterday, we were later told,  it had been 15 camels.  But, we were close enough to chat across the River Panj to the Afghan riders who were on their way down the river to sell produce at a bazaar.

Baktir decided his Land Cruiser need a wheel bearing fixed before it moved from Khorog. But guess what – his cousin Kusbai has a Land Cruiser too.