Having learnt that at about 9.30 Delhi’s traffic exponentially increases, we’d planned an early start.  Bill paid, bike checked, tyres pumped, luggage packed, well mine anyway, we tried to get an early night.
Lit up like beacons, with strong beams & flashing lights all round, we actually got away by 6 and, to be fair, the traffic wasn’t too bad. I went for the local approach weaving through the traffic and sod the lights, while Gid wasn’t quite so bold. But we made it, safe and sound, through to Faribadad by 7:30 only to have our way on to the shiny new flyover blocked by two guards. Once off the slip road, Garmin did the job of re-routeing us through the back streets and back onto the main road at the first possible point. That was entertaining! 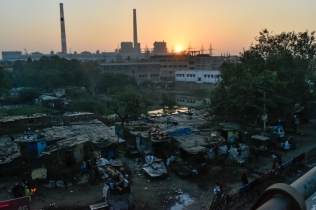 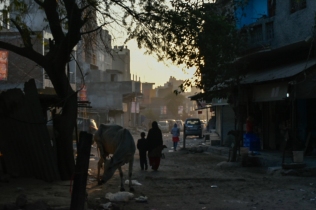 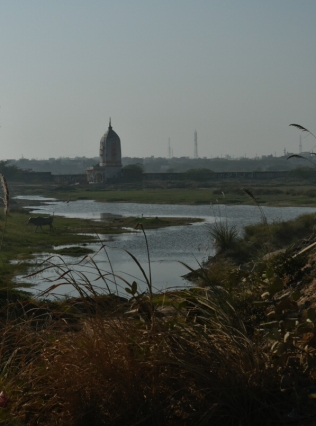 As always, in the latter countries we have visited, the back streets are very poorly maintained, past ramshackle buildings, with people who are very bemused to see us. Two superbly turned out school children in their uniforms, standing in the mud and squalor, proclaimed they were please to meet us, after being promoted by a proud parent through a round of English practising questions. They were so truly astonishing in their attire, politeness and pride that I was stuck for words as to how to convey my pleasure and surprise at meeting them in these surroundings.
Back on task we continued through the dust, dirt and rubble until we arrived at a railway crossing. On this occasion, Gid was well up for going local and was the first to wiggle his bike under the bent barrier, amongst the motorbikes, only to proclaim,  ‘Oh look, there’s the train’ as he glanced down the track at it approaching some 50 m away.
The Delhi-Agra route was very straight forward, one road, albeit with three designations: NH 2, 19, 44, thanks to an idealistic, but under implemented, renumbering of all India’s highways. It’s flat and well maintained so we made speedy progress. Even the towns we passed through weren’t too onerous; our background across the ‘Stans’ with, in town centres, traffic weaving around all over the place, stood in good stead. The Indians use a lot more horn though! There’s also a lot of vehicles going the wrong way, plus a few other road behaviours which we’ve not seen before, so the road’s never actually relaxing to be on. 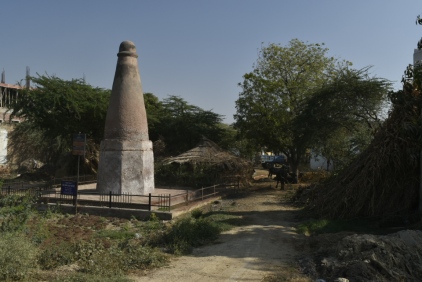 We didn’t do a huge distance.  Starting early, it still took maybe 4-6 hours to be clear of Delhi’s satellite towns. We finally reached agricultural areas interwoven with smaller towns. We stopped in roadside cafes for a drink once or twice, but for a late lunchtime managed to pull a little way off the road for an uninterrupted picnic. (Especially after the rat had scurried away.) Looking at maps and mileages, we decided that Hodal, our current location, was already halfway to Agra.  It was time to stop. In fact, from our tree trunk, we could see a potential resting place for the day..
The Rajasthan Motel. 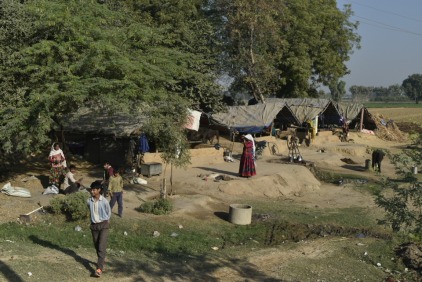 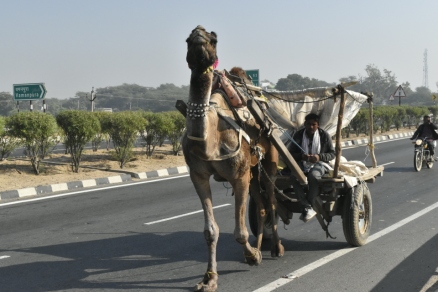 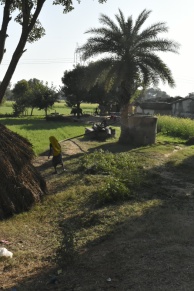 It was a peaceful oasis not only from our days cycling but from Delhi itself, which had been vibrant, noisy, chaotic and cramped. Partly down to Gid choosing a cheap hotel in the main bazaar. Sprawling in extensive gardens, Hodal’s motel was a total contrast. It was a bit over budget but lovely after Delhi and was almost empty of customers because the old highway, although under going an upgrade, is no longer the main road.  That, together with the extremely welcoming and friendly staff, sealed the deal.
It is part of a chain owned by the ex royal family of Rajasthan, and these very nice people looked after us again later. 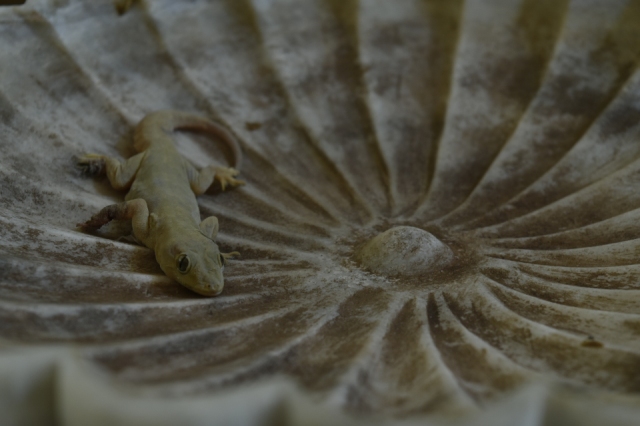 India cycling day two was a 119km run into Agra, city of the Taj Mahal. The ride was more of the same: pleasant weather, tailwind, flat, good road. Hooting and horn blasting. Friendly conversations with motorcyclists alongside. In towns, mad traffic and even more hooting. Physically in-taxing but mentally exhausting. Our Agra hotel was picked from Clare’s Lonely Planet guide, but not pre-booked. As in Delhi, cost was a dominant factor, so our room, unsurprisingly, was little bigger than the bed. Again, just like Delhi, there was a rooftop restaurant, but this time it had a really nice view – the Taj Mahal. It ought to have been rather pleasant, but continuous problems with the electricity in  our room meant no light and no fan.
We’d read that the best time to photograph the Taj is dawn. Naturally, Clare was all fired up, so we had our third dawn start in four days, groan. Actually the ticketing and entry process didn’t start until 6:30 am, so it wasn’t really dawn, but still quite early. 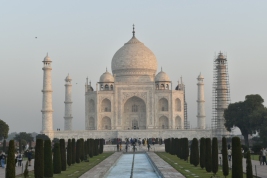 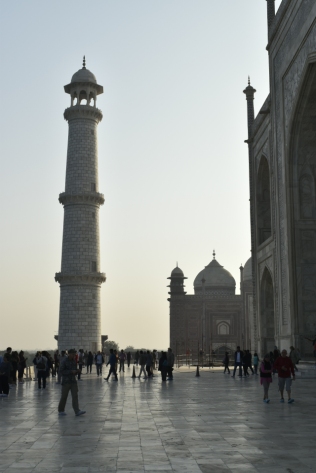 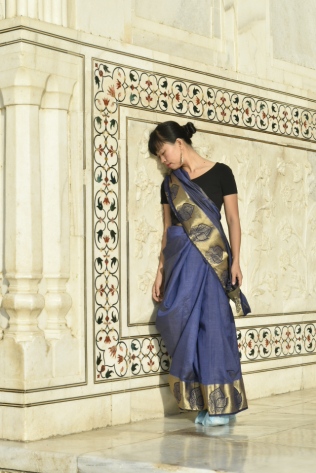 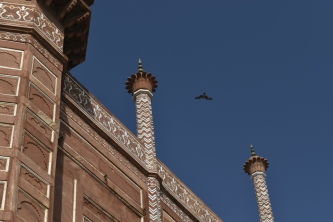 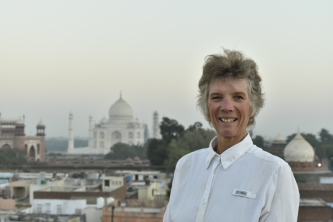 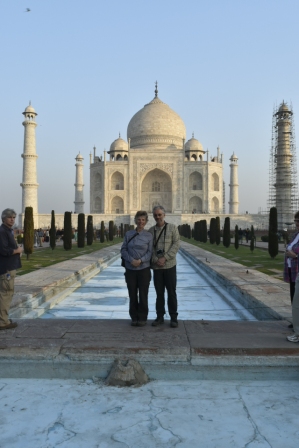 Agra itself was similar to Delhi insofar as the Taj Mahal and its surrounding area was very clean and modern; pristine, like the shopping malls we saw in Delhi, but a stones throw away it was back to squalor.  Some areas delightfully quaint but others out of the Tudor era with squalid water channels running between houses and the road. 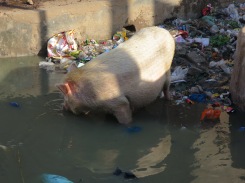 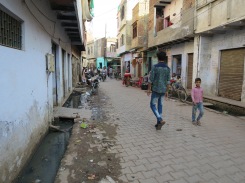 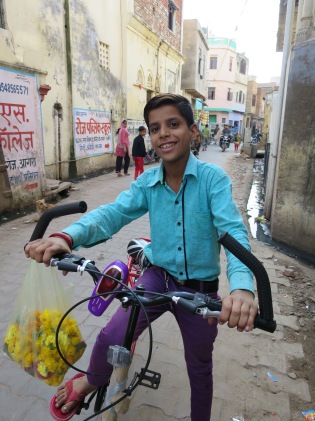 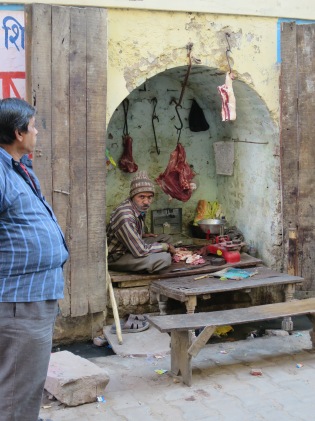 Keen to move on and find a quieter side to India, we had only a quick stop in Agra. Our next refuge was Bharatpur.  Another short day’s cycle but this was paradise! We spent the afternoon with a guide, Prakash,  leisurely cycling around the spacious Keoladeo bird / wildlife sanctuary. I can understand why British birders holiday here. Apart from the wealth of fabulous bird life, in this UNISCO listed site, the environment is wonderful. Antelope wandering around, cows, deer and at dusk we saw jackals. One area is currently closed because a leopard has moved in. 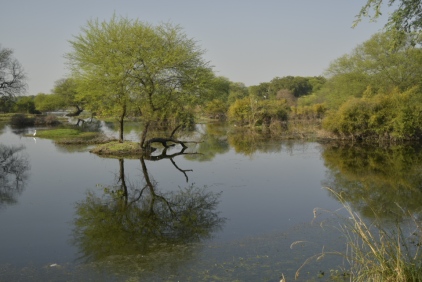 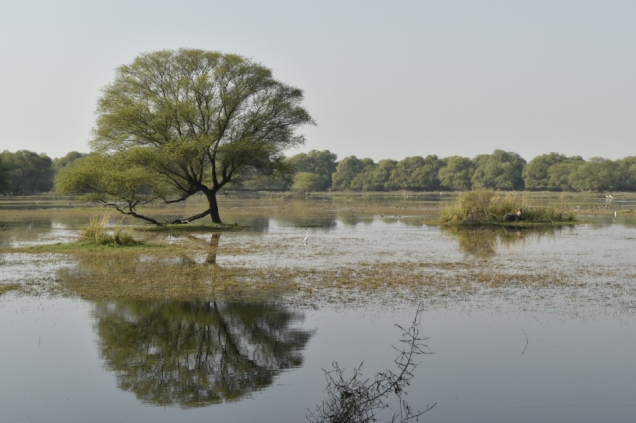 Antelope on island
Our next main town to visit was Jaipur. It’s the first main tourist destination travelling west into Rajasthan; not so big and bustling, the traffic was less hectic here. We bought a two day tourist ticket and spent three days doing it whilst continuing the great 2016 Indian cash hunt, not very successfully at times. 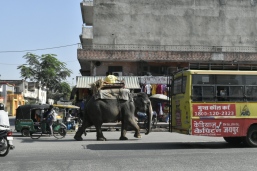 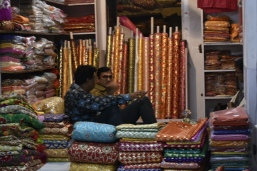 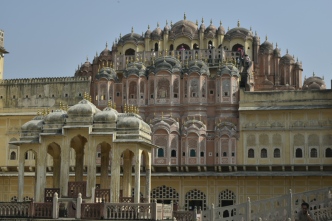 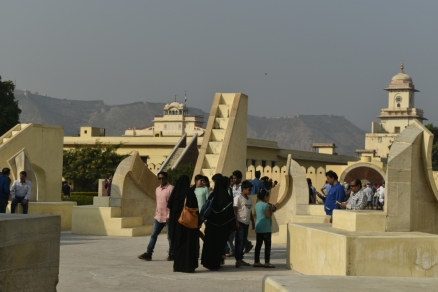 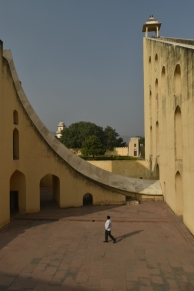 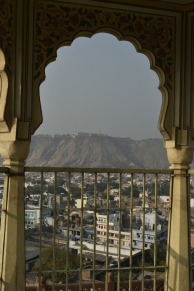 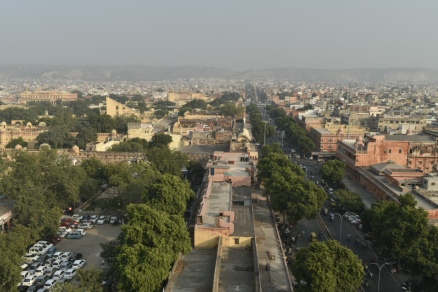 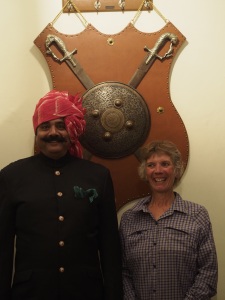 Just a kilometre away from the old city, in Jaipur, is Karuna Niwas. This time a homestay, but still a part of the chain owned by Ajeet and Ninja Singh, first encountered in Hodal.   Again, we were looked after very well with the added attention of  (I guess the term is) the family retainers, Roma and Bhanwer. Ajeet posing in his regalia, prior to going to a wedding: