It was with great excitement that I climbed into the jeep to set off on our camel trek. That lasted until I saw the camels and started to wonder what were we doing now. The camels were loaded up, all we had to do was hop on. That was where the trouble started. With no stirrups to help, how was I going to get my leg over that hump. And this camel is as tall as a pony – when it’s still sitting down.

The first couple of hours felt rather traumatic. I was so thrilled to be going on a camel trek, I wanted to snap away as we went but was too scared to take my hands off the saddle.  This was compounded by the terrible itch that, it was clear, my camel had.  He regularly half stumbled / lurched into a step, first his front leg kicked back then the back kicked forward but neither could reached this itch.

There is a deer further along the track. 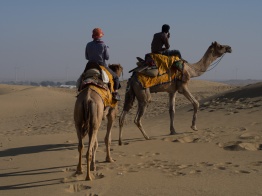 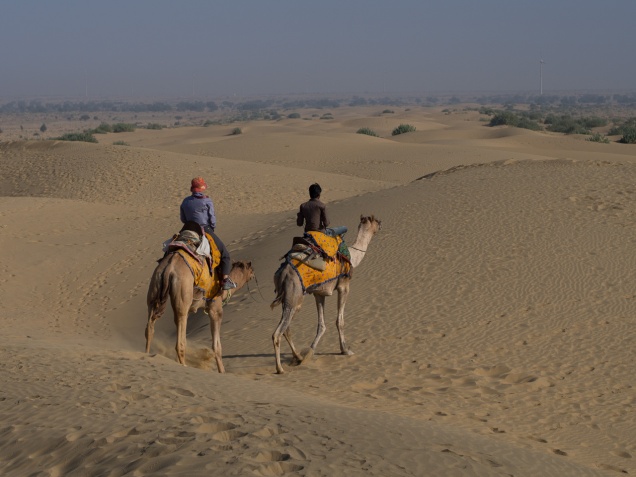 As time progressed I did get used to it and my camel husbandry improved; we were able to productively assist with managing and loading/ unloading the camels during our lunch break and at the end of the day. The camels wandered off if unhobbled and would have to be rounded up. Gid’s camel, even when hobbled, still made a break for it. The camel was tied into a sitting position, using his rein running down his chest to the hobble rope, only to shuffle along on his haunches. We started using the foot loops, which helped a lot, although locals don’t use them. By day three Gid, who was altogether more confident with the camels, was going solo and I could take photos at a trot. 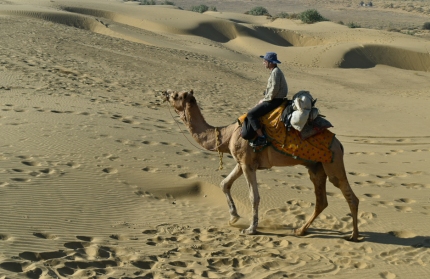 The trip itself was awesome. We rode the camels, for an hour or two at a time, along tracks through desert scrub, across sandy sections and over dunes, visiting the odd village as we went. 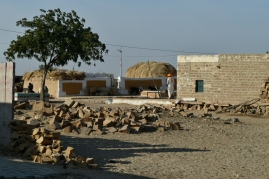 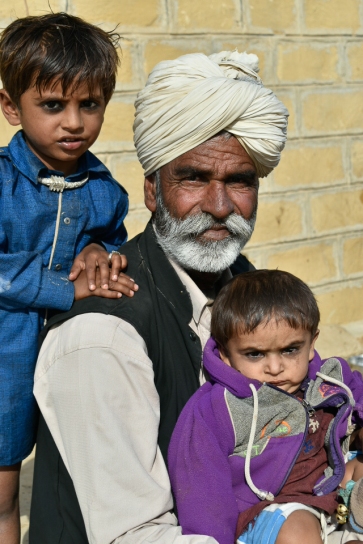 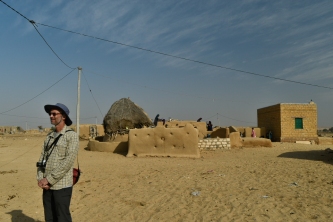 The villagers are used to tourists so we caused some excitement but weren’t mobbed. Rather fabulously we were invited into homes and regularly offered chai which was made on an open hearth in the corner of their courtyard – homes here are designed primarily to keep the sun off and the goats out – any breeze is most welcome.  Most people were happy to pose for photos; some performed a mini concert. Even very old people came out to see us. It was delightful to get a glimpse into village life. A small donation was always exchanged: 50 rupees for chai or photos, or 200 for a mini concert. To put this in context, a  labourer might earn 250 rupees a day, that’s about €4, so a couple of tourist visits in a day is a big bonus, especially at present in Mr Modi’s cash crisis.

Children repeatedly asked for ‘school pen, school pen’. One 15 year old lad, able to speak some English, told us there was a village school. The teacher might come on Monday, Tuesday and Wednesday, he said, but then miss Thursday. He also told us he couldn’t read or write. That, it would appear, is not uncommon. Our guide, Harish, who had picked up English from tourists, proclaimed that he could not read or write but his younger brother could because school had opened, in his village, in 2011. Our second guide, Saleem, couldn’t spell his own name for us when he asked us to mention him in our reviews.
The desert camp experience was fantastic.  We learnt several desert life ‘tricks of the trade’ such as hollowing out a bed in the sand and, in winter, lining it with covered stones from the fire for extra warmth and how to catch a goat to milk it for fresh milk in the chai (someone else’s goat, that is, so it may be, ahem, not entirely welcome). ‘Washing up’ with sand we’re already familiar with from our background in canoeing and kayaking trips but it was a first for sleeping on dunes under the stars with gerbils scurrying around in the shrubs behind us.

Don’t know if the goat’s owner would appreciate this… 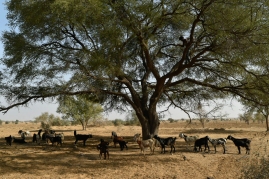 Harish up the tree, collecting firewood 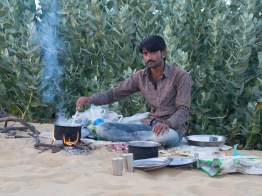 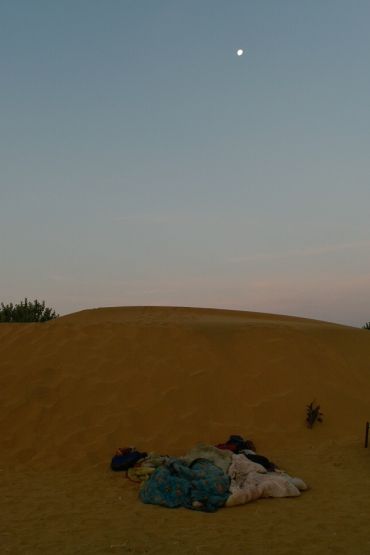 Gid is still asleep in this bedding 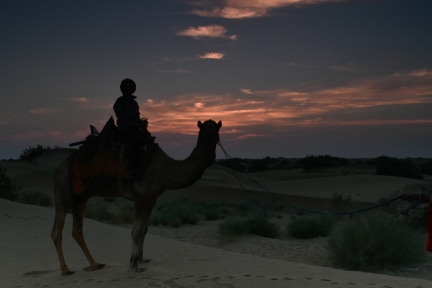 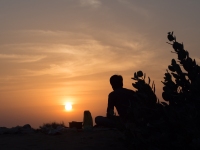 Day 2 Gid asleep
The Thar desert is the most populated desert in the world. The Indira Gandhi canal must have done much to improve the water supply but, when the rains fail, as had been the case this year, the crops don’t grow and we passed a few ploughed fields where nothing was growing. Harish had to reach deep to get water from the storage tank. But it seems to be being managed – people and animals get enough to drink, and some fields are irrigated. 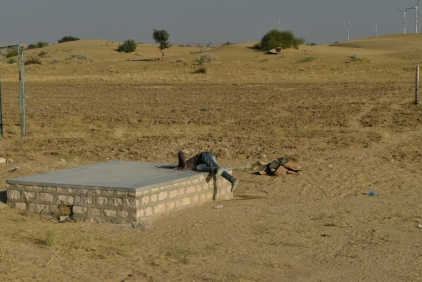 There’s quite a bit of wildlife, too, although apart from birds, we only saw gerbils, chipmunks and beetles, during the actual camel trek. There were several different large birds of prey, and also Egyptian Vultures. The high point was a lunch spot near to an eagle’s nest in a tree, we saw them visiting their chicks from a distance, but when Gid tried hiding behind a tree about 70m away, the parents spotted him, and waited on some rocks a km away before returning. So not much in the way of photos from that encounter.

This was our Christmas card photo
End.