Thailand was initially, following on from our route across the ‘Stan’s’, India and Myanmar, extraordinarily ordinary. 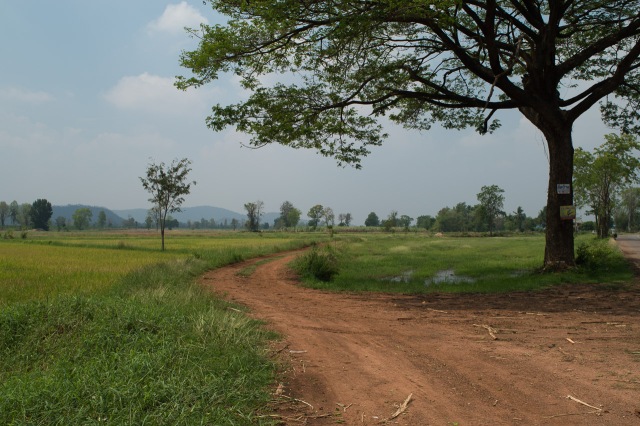 Much of the scenery could have been back in Sussex; fields dotted with trees, some ploughed others left to scrub land. A few oxen, occasional sugar cane fields and the odd palm tree marked it as different. The homes and shops were frequently brick built. The shacks, when they existed, were now a more up market version of log cabins rather than the flimsy woven bamboo affairs frequently seen in Myanmar. Actually, we haven’t seen much bamboo growing, perhaps that’s why?
There is also no evidence of a national or historical costume. Way back we have seen traditions that have marked the different nations: the occasionally worn Lederhosen in Germany, shoes with curled up toes right back in Vienna, scull caps – square, Uzbekistan, scull caps round, Kazakhstan,  tall felt hats – Kyrgyzstan or buzzbeee style hats –  Karakalpakstan, and saris in India of course.
https://mondaybazaar.wordpress.com/2016/05/27/hang-on-to-your-hats-an-exhaustive-guide-to-central-asian-headgear/
Having just crossed the border from Myanmar, where more men than women wore long wrap around skirts called longees, it was a surprise to see in Thailand we’re back to western clothes and hair styles. If there’s a national costume, it seems to be the mini-skirt, at least for the ladies.
And the road traffic features fewer local oddities as seen in the ‘stans, India and Myanmar. On the wide main roads mostly modern vehicles travel at developed world speeds, unlike their western neighbours.
We knew that Thailand is more Westernised than its western neighbours but it felt rather disappointing. Although it is nice to dive into the frequent 7-11 or Tesco Lotus for chocolate milk shake and other goodies.
Gradually, like opening a Pandora’s box, we’ve uncovered Thailand’s unique delights.
Keen to keep off the main roads, we’ve, as often, relied upon the Garmin to weave us a route along the minor roads. At times this has lead to the occasional dirt track which has so far been well compacted and manageable. We drew the line at the ‘path’ where a narrow trail led off across the grass next to a field and luckily found an alternative track. (After all these month’s I’ve finally learnt how to scroll between visual maps on the Garmin and step by step written directions so we can now check out what delights our route has in store and reject  ‘bad track’ options.)

It’s been along these minor roads that we’ve discovered Thailand’s delights. After crossing the border we were, as in India, in the midst of the sugar cane harvest. Then pineapple farms were a nice surprise followed by waterways where wooden longtail boats power past less sophisticated shacks bringing home the reality that economic development hasn’t reached every corner of Thailand.

Oh yes – another reason it’s a bit familiar – as you can see in a lot of these pictures, around week #3 in Thailand,  April got rather cloudy and rainy. In a way, that was a relief, as it wasn’t so hot and we could go further and faster. Air-con rooms meant we dried out overnight. But after a few days the heavy rain showers got tedious, and certainly the bikes’ gears and brakes didn’t appreciate them.
Coconut palm plantations were another delight where we wove our way through small lanes between furrowed waterways densely planted with palm trees. The tall palms cut out the light giving it a real jungle feel with lots of birds calling from the under growth.  Homes are dotted amongst them where people busily welded machetes chopping off the husks and splitting the coconuts – milk one way , flesh another. 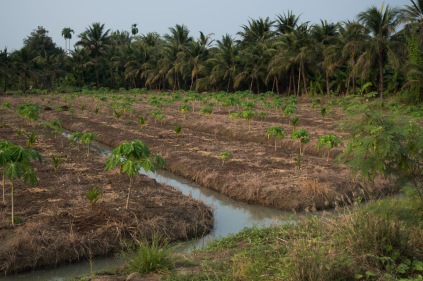 Markets, many floating in this maze of water ways, also have a few treasures. Frogs, half gutted of course, chickens feet, fresh or on the café menu, pig’s trotters or whole face if you’re feeling hungry, together with a large assortment of fish and shell fish, are now all available.

As well as the above we now have salt farms and fish farms. The latter in an array of inland lakes or with fishing huts out in the estuary, which add a different take on farming. Some we think may be shellfish or crayfish as the dug out pits whilst aeriated are quite shallow.

As we have cycled further south the dominant crop is coconut.  Unlike Myanmar where bamboo ladders were used to climb the tall trunks, here our primate cousins are exploited as it’s monkeys who agilely bound up the lofty heights. A bit of chewing, a bit of twisting and down thumps another husk while the owner, looking on, makes a few encouraging noises from the ground. 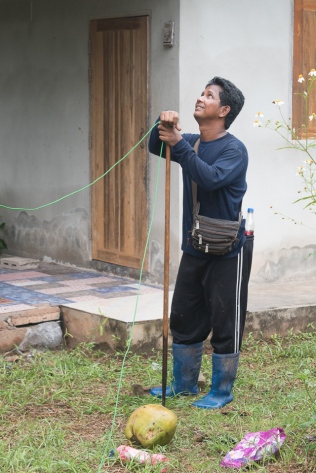 These harvesting teams travel about in style; monkeys are pillion passengers, in the shopping baskets or on the side-cars of motorbikes. It’s not the dog peering out of the utility trucks, monkeys are keen to see where they are going. On these rural roads the traffic is less like home – everyone seems to ride a small motorbike, almost all commercial traffic is in pickups, and there are the distinctive Thai open sidecars with a fringe on top.
The wildlife has also taken off. In Myanmar even the trekking guides carry catapults, so the wildlife needs to keep its head down. Thailand doesn’t seem to have that problem – and has many national parks – so we’ve seen a lot more. Also, now in southern Thailand, we’re definitely in a different ecosystem – tropical rainforest – even if a lot of it is replaced with monoculture palm or pineapple plantations and hotels. More about wildlife in the birds and beasties log (update coming soon).