‘We’re having a drought.  Haven’t had any rain for months. The Roman cistern is so low due to the lack of rain,’ were the cries we heard but the streets were jammed full of umbrellas: doorways blocked by umbrellas, umbrella stands packed with umbrellas, street sellers brandishing umbrellas, eye level – a sea of umbrellas. 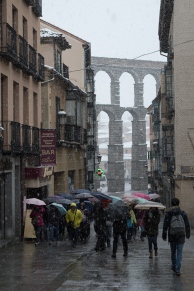 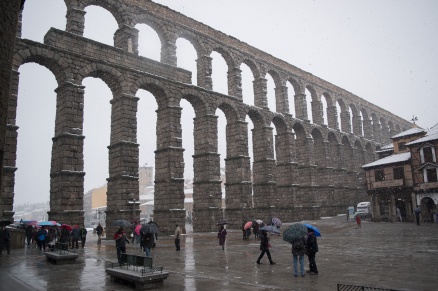 ‘I’m a cyclist too,’ explained one fed-up man cowering in a tavern. ‘Five days this week I’ve been soaked to the skin,. Today I’ve walked. So many months with no rain and now we’ve got it all at once.’ he exclaimed, arms flailing wildly. 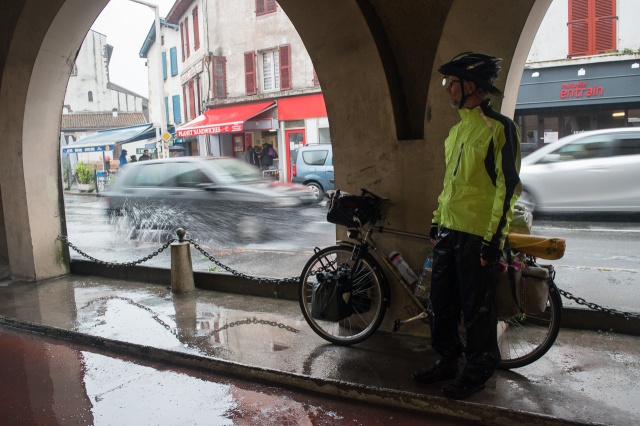 In amongst the armies of umbrellas were the two silver cyclists dressed from head to foot in water proof cycle clothes. Well nearly, I’ve only got sandals and I’m not sure my waterproof socks work anymore. ‘At least you’re properly dressed for the weather,’ said a Lisbon museum curator, as we wandered through his rooms, but he was clearly pondering over my ‘choice’ of footwear. Suitable it certainly wasn’t: In Segovia, spotting a Decathlon near our hostal, I dived in and upgraded back to boots for my off-bike footwear. It was Gid’s idea (back in Phoenix) to use sandals – and waterproof socks if necessary – off the bike, since he’s done the whole trip riding in sandals. But somehow, he didn’t ever actually do it off the bike; I enthusiastically took his lead. Oops. 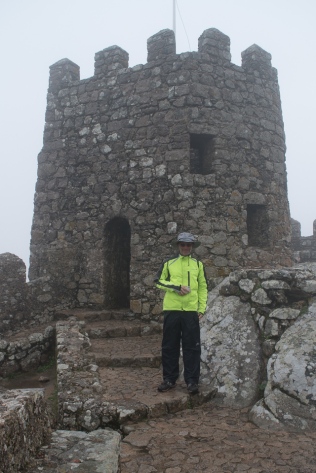 Sporting our newly purchased rain hats, we were pretty water resistant in our cycling gear. With a slight bit of modification the hat fits under our cycle helmets adapted to allow the all important helmet mirror to work. Sun hat, rain hat, come what may, one-hat-does-all. One minor catch is that the brim is so good at stopping the rain from penetrating the fabric that a river flows off it when you tilt your head; on several occasions, nearly tipping a deluge of water into our bar bags as we looked down, cracking a hole under the lid, to sneak something out. 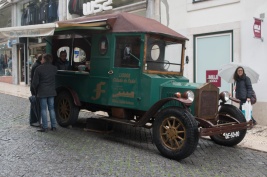 Walking around town, with very little exertion, the rain kit is perfect but for an entire days cycling all is not so good. Flying into Lisbon we had plunged full-on into hilly country. Whilst we’ve had a couple of flatter days hills dominate the terrain.
And as we got higher, the rain turned to snow or hail. Here we are in the minor range of mountains between Madrid and Segovia. You might see a skier or two in the background.

Cycling up hills in rain kit results in massive amounts of perspiration inside, soaking the clothing and lining the garments. Attempts at venting the attire allows the rain in. Gid seems to stay dryer is his relatively new jacket with arm pit ventilation while my, again newish, rain legs seem to do the trick. But older kit is showing signs of being beaten. Design flaws are exposed too – Gid’s Endura  jacket keeps him dry, but the “waterproof zip” front pocket actually is more of a bucket – after a day in the rain everything in it is awash as rain gets in, but not out. Amazingly, the waterproof sock system works pretty well. At least, it does for Gid. Clare’s are shorter, and older, and seem to leak – mind you, she has darned them (eh?). The Ortlieb and Carradice panniers do pretty well, but Gid’s rack bag and bar bag – both a decade old when we started – have wear holes, which inevitably leak.
Although our cased-up maps, and outdoorsy Garmin Edge work irrespective of the weather, the same can’t be said of the phones. We tend to use the phones especially for finding accommodation as we approach or search in some place (the Garmin doesn’t really do this level of detail). But arriving in Caceres, that went horribly wrong. Raindrops confuse the touchscreens, and torrential rain confuses them utterly. And as we tried our few pre-planned hostels, we realised the town was full. It was so wet it was difficult moving around the city or talking. We really needed those phones to work to show us the places to try. Eventually, old school, one helpful hostel owner, who couldn’t offer us accommodation, rang round the others to find us a space. Gracias Senora.
Our tent, which held off riverlets and heavy torrential rain several years ago in Alaska, is one such casualty. While crawling into the vestibule with weight on the groundsheet, water oozed up. I moved our foam mini mat over the offending area and tried to ignore it but by the morning water had seeped up through the inner tent leaving a soggy mess. Our aim that day was to crack a challenging mileage to make a major town. Helpful Warmshowers host Fernando had told us he could do the trip by lunchtime. With the Garmin set, off we went, panniers full of wet camping kit, up the nearest hill. We’d forgotten to tell our future host that we were actually not quite in the fortress town we’d told him but, in fact, we were the far side of the mountain it stood on!  It took us 1 1/4 hours to cover the 10km in pouring rain. The Garmin, repeatedly trying to take us on short cuts up one dirt track or another, finally succeeded as we took off on a short linking track to get us back on course. The start was fine but in the 1.5 km we had to cover at least half of it was steeply down some farmers lane with, in this rain, deep cut rivulets and wet rocks.

Once back on our future host’s nice smooth, nearly flat road we limped into the newest town with a hostel to cancel the rest of the day. Achieving merely a third of our target distance we draped the room with dripping tent, sleeping bags, mattresses etc.
All part of the adventure it seems. It’s good to read accounts of trips 20 years ago, before any of this electronic nonsense or longer, before breathable waterproofs and English being the universal travellers’ language, and then consider ourselves as lucky.
We had better note, that after some of our previous weather-related moans, so far in Europe, we’ve only had one day of bonkers headwind. Mostly winds have been light and/or on our backs. This may change as we approach France’s Atlantic coast.