Off again.  As lovely as Vienna is it is great to be on the road again.
Whilst I was aware that the Danube is a very popular route I had never expected quite the number of people touring that we have met. Some days we’ve played leapfrog along the way with other touring cyclists where one or other of us has taken a break whilst the other whizzes past. On some occasions we have arrived at the same campsite for a couple of nights. With one couple we’d both taken time out in Vienna & our paths have just crossed again. This creates a great sense of comradery.  Equally, at times there have been 40 or 50 bikes lined up outside beer gardens or, at a random junction, 30 odd cyclists with many groups consisting of entire families.
Cyclists have entire routes with thorough signage & on one occasion a mirror was placed on a tight corner.  As we have moved on from Germany and Austria the quality of the tracks has deteriorated.  Here in Budapest there are  very few cycle paths around the city.  Mixing with the traffic adds another element to the cycling
As we’ve travelled through the countries I’ve been very interested to see how local people seem to have very long allotment or garden strips.  This has been evident since Germany and maybe earlier on.  Some of these strips have vegetables, fruit bushes or trees much the same as you’d see on a English allotment but many have a variety of different things such as  horses, chickens, ‘country garden’ flowers and shrubs and some a combination of the above.  The strips are quite skinny in comparison to their length so it looks very odd to see a horse, stable,  cart and bail of hay, on this long skinny strip.
On route to Budapest we enjoyed a short day taking a lunch time dip in the Danube and arriving at our campsite, in Esztergom, by 3pm.  Listed in Neale’s guide book as a delightful town we set off to explore the castle on a hill top, numerous churches and the usual cobbled streets.

Captured in a mirror 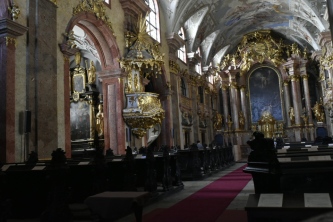 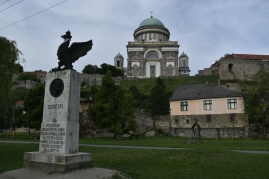 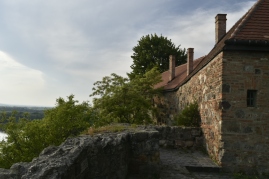 Part of the castle

Lunch spot
After two days with some heavy rain & arriving at the campsite in a pretty sodden state, we’ve moved into a hostel for the  next three days that we’ll be spending in Budapest.  This gives us the added security of knowing that our kit is under lock and key and a  chance to dry out.
First impressions of Budapest are that it is awesome.  The Houses of Parliament are stunning.  Budapest is  quite small in comparison to London therefore the museums, grand hotels, monuments etc. are very near each other which has quite an impact, as in every direction you look, there is something stunning to see.

Ferry across the Danube 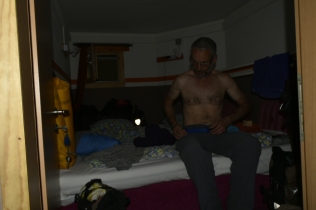 Our tiny room in Budapest

Budapest, Parliament view
Now we’ve been here for a couple of days and moved off the well trodden tourist route another aspect of the city is coming to the fore.  Many of the back streets, whilst they can have very interesting little shops and eating places (we passed a street market area which was called A Jewish Street Eating Market) there is also a high degree of dilapidation in both the buildings, many needing cosmetic rendering, pointing and general repairs while others need more structural rebuilding, and the roads/paths. 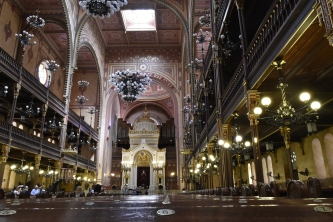 Synagogue
We’ve visited a number of the key tourist sights which have been very splendid and also done a couple of museums and places of interest one of which was the main Jewish synagogue.  This was attached to a museum which outlined the impact of the Holocaust on the Jewish communities in Hungary and how they tried to secure their Jewish historic artefacts and culture through the years of persecution.  This, together with a wall recording the Jews who perished during this period and a memorial tree with every leaf naming a person, were very moving and powerful experiences.  The synagogue, whilst in principle similar to a church, was a very different and magnificent building.
The second museum we visited was about the torture of the Hungarian people during the Second World War and the Russian dictatorship that followed.  Again, this was a very moving and powerful portrayal of the impact it had on Hungary as a nation and the specific impact on citizens, families and communities during these times. 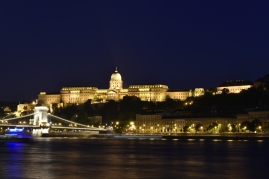 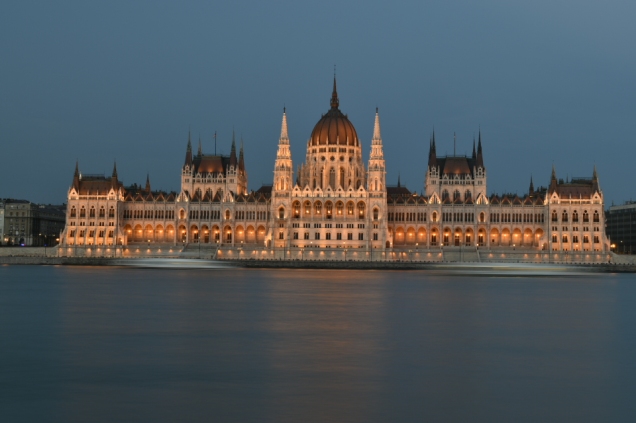 One comment on “To Budapest and a Short Stop”