Heading into Tbilisi from Mtskheta we’d tried to miss the main road.  The Garmin had come up with another route that seemed fairly direct.  All was going well until it directed us to turn right onto a dirt track directly up a hill.  No way!  The total journey was only 26km but that could take us all day if we hit a really lumpy dirt road, and we were cruising along nicely without too much traffic.

Shortly after this decision the motorway merged with our main road; the traffic increased exponentially.  With a few hair raising moments you’d expect when cycling in a city we made it into the tourist centre and from there to our accommodation.

We had a few days to kill, while waiting for our Azerbaijan visa to become valid. So off we went exploring.

Churches – the most prominent being the new cathedral built in time for the millennium (that doesn’t include decorating the inside, which may take decades). Others date from Byzantine times. 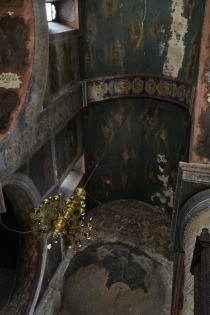 Sketch for a frescoe 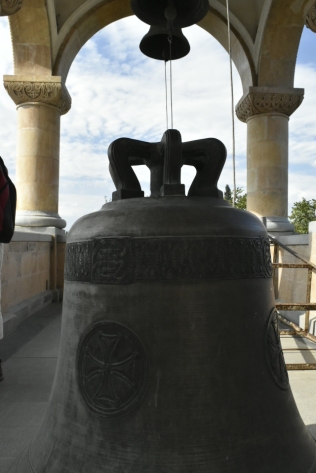 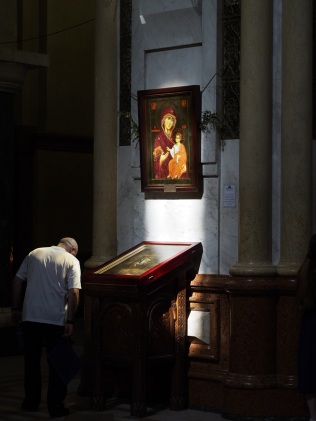 Revival of the steele

Balconies are a special feature of old Tbilisi.

Gold roof of the new cathedral in the back ground.

We also visited museums: one on Tbilisi itself, another on Georgia, and the outdoor Ethnographic museum (very similar to Sussex’s Weald & Downland Museum).  We baulked at the 11GEL each for the music museum where it is compulsory to have a guide.  Most of the museums, so far have had information within the cabinets in the home language, Russian, and English and we prefer to  wander round at out own pace.

Gid in cable car going up to fortress. 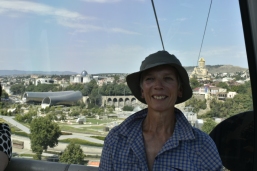 Easterly view from inside cable car.

The Flea Market is another feature of Tbilisi. It’s also good for buying original paintings, or at least, it appears so to our unschooled eyes. Generally the city wears its artistic endeavours on its sleeve, including where we stayed, in Nino’s Guesthouse, which is like a mini gallery. 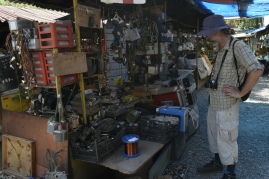 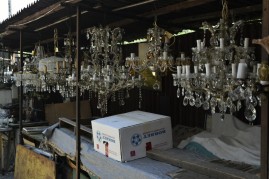 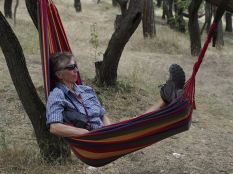 You can buy almost anything there… 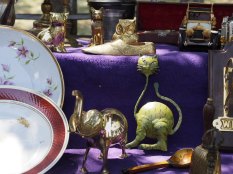 There was its twin on another stall (NB: Bright green)

Don’t think the underlying Lada was for sale?

And there’s lots more to see, out and about on the streets. 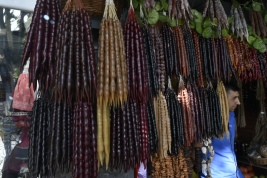 A nut snack with a caramalised covering.

A fairly typical minor street in the old town.

The bread shop was closed 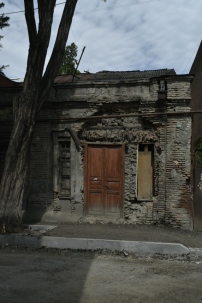 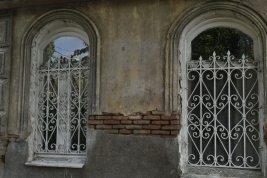 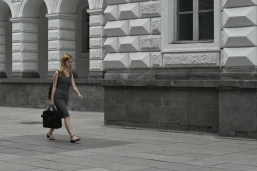 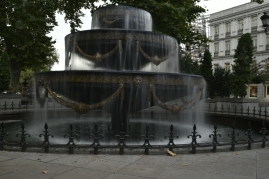 Your headstone’s not straight

Taken straight out of the door of Nino’s Guesthouse 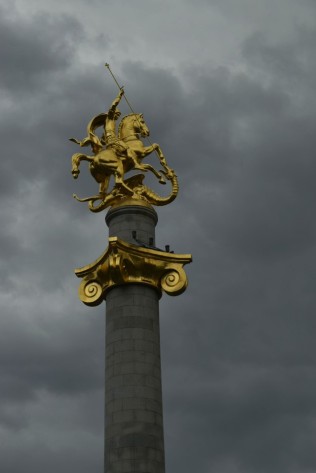 The Museum of Ethnology – most houses are between 100 and 200 years old. 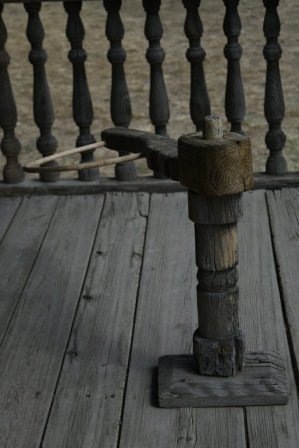 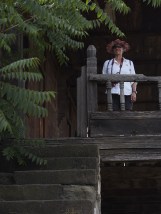 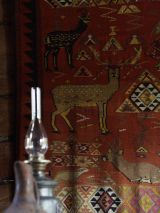 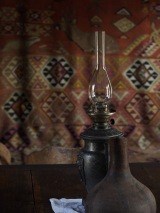 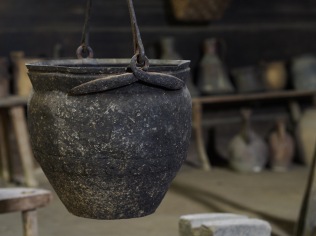 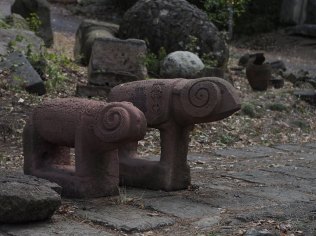 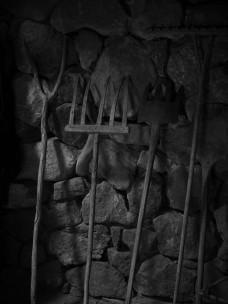 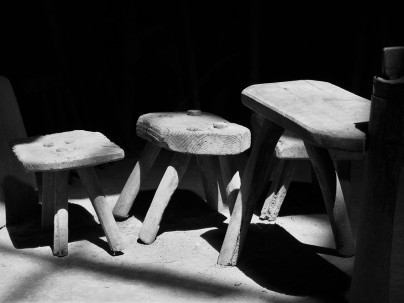 Have you heard the one about the bears and the porridge?

All in all, a thoroughly photogenic city, with lots and lots of cheap accommodation. 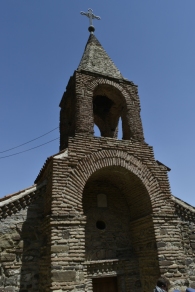 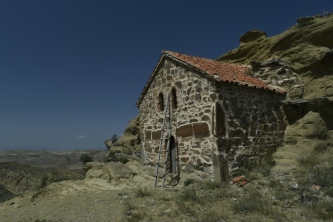 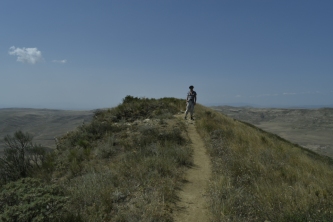 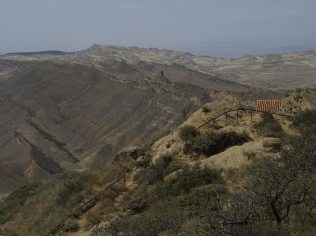 Azerbaijan on the left, Georgia on the right

Looking out over Azerbaijan

Fresco, and grafitti in Russian and Georgian 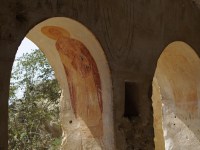 Inside a frescoed cave

Bit of a scramble

Spot the monk on the phone?

Finally, 19th Aug, we left Tbilisi. We had one errand to do first – post the Tbilisi souvenirs home. It took quite a while to find the Post Office, but as from Turkey on, the helpful chap serving wanted to know what was in there, for the customs declaration. Whereupon we came unstuck! The main item is a saddle bag, made in the same way as a kelim rug. Clare’s wanted one since Cappadocia. Normally, carpet shops claim they are “antique”, although often the age is faked, and want well north of $100 (yes, dollars, for some reason). However, Tbilisi’s flea market made no claims of age, and Clare beat the seller down to 110 GEL, much more realistic (about $40). Good. But. Both online and in Nino’s LP guide, there are warnings about the potential difficulty of taking out of countries, or sending, carpets especially and anything that might be part of the nation’s cultural heritage. So, post office man sends us off to the Ministry of Culture to get a letter certifying it isn’t old, and while we’re about it, also covering the two felt glove puppets. They obviously are not antiques, but to be fair, customs might have to open the package to see that. The ministry sent us on to the correct agency. All three are within about a square kilometre of central Tbilisi, but the bikes, one way system, and step-ridden pedestrian accesses, plus the moderate difficulty of finding the places, means it takes a while. The letter itself takes about 30 minutes, and a pleasant surprise is – no charge. Then, embarrassingly, it takes us an hour at least to find the same post office again. Now it’s lunchtime, so everyone is in there, except most of the staff. An hour queueing, then at least 30 minutes to send the thing (lots of forms). We finally set off from Tbilisi at 14:30. Good job we’d planned only a 55km ride to Sagarejo, where, fortunately, it was very easy to find what we think was the only hotel. Let’s hope the donkey bag proves as useful as expected once (if) it gets home.