Finally, having calculated, and re-calculated the interaction between the Azerbaijan visa period, the Kazakhstan visa validity, and travel times, we left Tbilisi (really late in a day, see previous blog post about postage), for a fairly horrible main road ride east. Can’t remember where we stayed that night, but towards the end of the day, the traffic was much less of a problem – it was all Tbilisi traffic, not long distance. The next day’s ride was pleasant enough but unmemorable (at least, I can’t remember much of it). Nino, our Tbilisi landlady had recommended a friend’s guesthouse in Sighnaghi, which apart from being up a big hill, was a fine choice. Well, the whole town was up the hill, and a very nice, if totally touristic, town it was too. In Georgia, it’s the town of love, and popular for honeymoons. The guesthouse made a bit of a thing of the family’s folk music, so in the evening, after we’d come back from a nice meal, there was Georgian wine, Georgian brandy and travellers from all over (especially Israel, including Vicky and Aaron we’d met at Nino’s). This sing-song was especially appropriate as it was CLARE’S 60TH BIRTHDAY! Happy Birthday my love!

Every town has a war memorial, this one I hope was regional, as there were a lot of names on it. I think she may have been honeymooning… 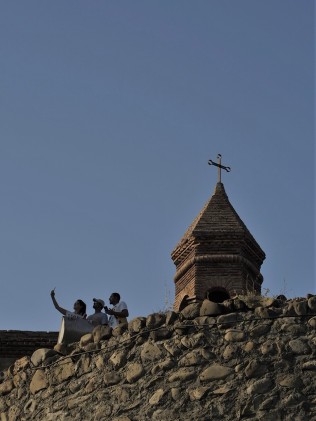 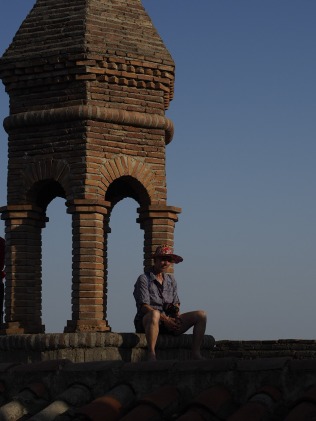 Birthday Girl at the top of Sighnaghi 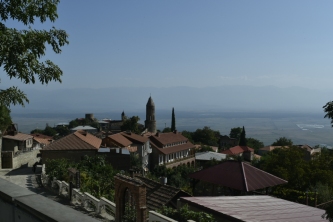 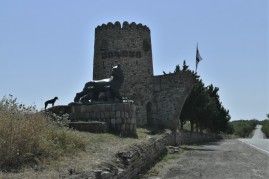 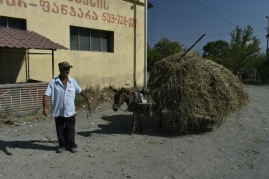 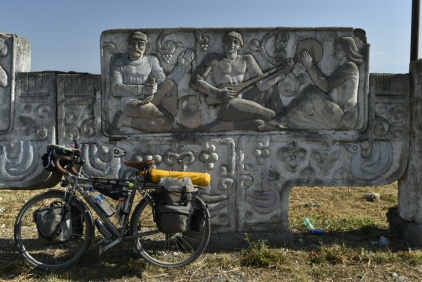 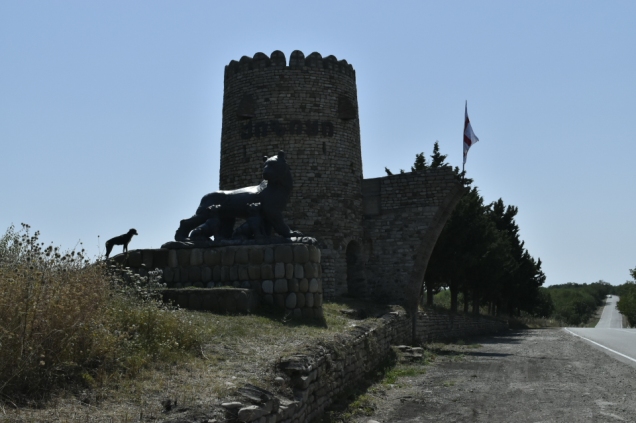 After a 12km winding route down hill we cruised along on the next day, crossing the flat plain towards the Greater Caucasus (see picture above).  We experienced a new kind of road side stall.

Using a tree trunk as a cutting platform 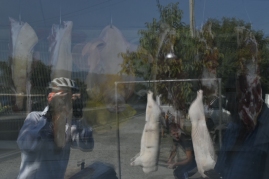 A fridge unite. No idea how effective it was. 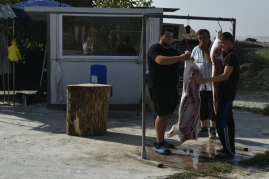 We stopped in the afternoon under a random tree for a swig of water and handful of nuts. Along just a bit someone was working in a bit of field. After our “gamma joba”, somehow, they decided we were worthy of inviting in for chai. We didn’t have much language to share, muddling by with a bit of Russian phrasebook, Google Translate, and pointing and laughing. The old couple showed us a postcard – they’d previously invited in a Swiss cyclist(s?): So, lacking a postcard, we had to sketch them one to add to their collection. Chai was on offer, these were Turkic folk, Azerbaijanis – if they’d been Georgians it would probably have been wine. It’s an interesting difference to Northern Europe, this: borders have been stable for at least 95 years, and in nationality terms these were Georgians – to go to Azerbaijan they indicated they need a visa. But one of the first things they said – about the time we said we were English – was they were Azerbaijanis. For all these Caucasus countries, statistics are quoted X% Georgians Y% Azerbaijanis, Z% Russians, etc. The ethnic identities are (I think) defined from the mother tongues, which is why in the early-mid twentieth century, the big governments (Turkey, Russia), made efforts to stamp out, or at least discourage, the local languages, and teach only the “empire” lingo. They also at times forcefully moved tens of thousands of people about, to achieve particular ethnic mixes to suit their purposes. Not so nowadays AFAIK, but a lot of the border troubles in the region must be because of the mismatch between culture/ethnicity, and state borders. Some of which is our own government’s fault (up to Mr W. Churchill’s generation), as the British Empire was very much a force in the region, and had a particular habit of setting borders to divide peoples, and create weak, manipulable states. Together with our lot, the Czars, the Ottomans, and the Persians were all meddling away in their “Great Game”, it’s hardly surprising the borders, people and politics are rather unsettled. Anyway, these folk were extremely friendly and generous, and I for one felt rather guilty we had no present to leave. Perhaps we should have a stash of postcards from Worthing. The old couple (err, well, they may not have been much older than us) lived in very humble circumstances. Their house was tiny and made of bits. Shady in summer but, if they didn’t move to town in winter, rather horrible then, I expect, even in the mild, plain winter. The kitchen area was out back and roofed, but unwalled and a mud floor, running water from a piped spring . Yet, it was a nice place to be, shady, with a cooling breeze, and everything vital close to hand (yes, including a mobile). They also offered us milk – fresh, but scalded & warm: This was delicious. It seemed to be a truly subsistence farming operation; the cow chewed the cud nearby, ducks on the pond, the agriculture looked like a smallholding, little bits of everything.

The kitchen – stove a bit like our MSR, but probably more durable.. Cooking utensils & tool kit on shelving unit.

Next stop was Lagodehki, chosen as a town to let us cross the Azerbaijan border early in the day. It’s also the edge of Georgia’s easternmost national park, a remote area that runs up into the Greater Caucasus mountains and the Russian border. We knew there’d be guesthouses, and arriving mid-afternoon, were cruising relaxedly up one of the main streets, looking for somewhere to stay. We passed one or two but carried on. A young man seemed to be dozing on a bench, but leapt up as we passed, to ask (in Georgian) if we needed a guesthouse. Well, we didn’t understand the words, but the context made it all plain. The house was unsigned. This seems common for Georgian guesthouses. A cynical  British view would suspect something to do with the tax system. In Tbilisi we’d been mildly scammed when a fellow enticed us into a restaurant, which afterwards presented an appalling bill (and didn’t offer change, when we certainly didn’t intend leaving a tip): Fortunately we’d only consumed one hot drink each, so the “appalling bill”, while infuriating, wasn’t actually much. So we were wary in this case, but with no reason. After a small delay while the landlady whizzed up from the village centre, we inspected, learnt the cost of (amazingly cheap, so we lazily opted for breakfast and dinner, which was still good value, especially as the breakfast was enough to doggy-bag for lunch), and were soon ensconced. Nino (most Georgian landladys seem to be called Nino) provided us with a self contained ground floor apartment. She also wielded a sheaf  of leaflets, and indicated we were only about 500m from the National Park office, and how nice the park was, etc, etc, again all in Georgian, or was it Russian.  It’s amazing how clear it can be without understanding a word. So after a shower, we wandered up to the park office for more information. Reassuringly, the stuffed & mounted bear was quite small.

… and replanned again, so we’d hike tomorrow, staying two nights not one, delaying our entry to Azerbaijan another day. The hike involved a 14km cycle to the start, blissfully unloaded. It was only a day hike, so only a picnic, camera, and swimmers were needed.

The hike had a few tiny scrambles, but the only challenge really was the log river crossings. Compared to the earlier Georgia hike, the logs were wider, and less high up, and the exercise felt less committing – so we managed to walk across them this time. At the top there was a lovely waterfall, a nice pool for a dip, and a dozen or so Georgians also enjoying the day out and a picnic. One suspects Georgians should be rather good at picnics.

We’re getting good at this now

It’s just a larf if there’s a handrail