On leaving Yangon airport, after our flight from India, it was like stepping back into normality albeit with a sauna full on. The taxi had four – count them – wheels, and four – listen – cylinders, real springs, and the driver’s style had only a soothing effect on our blood pressure. Other cars travelled along marked lanes with the occasional brief hoot as we listened to the purr of motor car engines. Motorbikes are banned! Buses cruised along. All very orderly and blissfully peaceful. Melodic bird song returned to our ears.
The city itself was, by comparison, clean, although as we explored further we found many similarities with India: crowds, street vendors, wires draped along the buildings and criss-crossing the streets, surface drainage channels and food stalls filling the pavement. But no cows, no hasslers, and the wares now carried on shoulder poles. And did we mention, no hooting? We visited quietly busy pagodas and restocked on memory cards and a few bike bits. 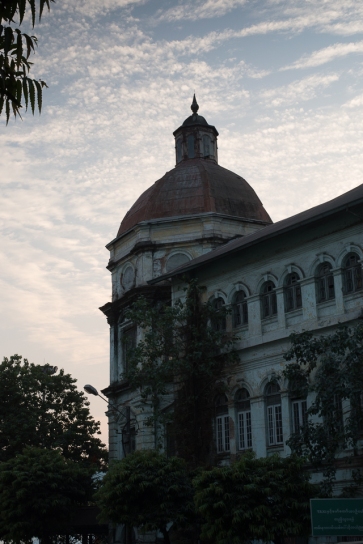 Our plan for Myanmar was designed to show us some of the country, bearing in mind that we’d flown into almost the “end” of it, near the Thai border. So, we used alternative transports to backtrack about halfway up the country, back towards the border with India. Not that riverboats or Myanmar trains go much faster than a bicycle, but they do keep going for longer and don’t collapse from exhaustion.
Decidedly top heavy, perched on a one metre wide gauge, the sleeper train from Yangon to Bagan lurched and jolted along, frequently caterpillar style whilst wobbling from side to side. Sharing the carriage with Anton from Germany and the many bugs and mosquitoes, left us all with ample space but the mossies seemed rather greedy. Gid resorted to a bug net overnight, carefully tucking me in as well. Lurching along in the train we were submerged in village life: fields being watered or tended to, traffic waiting for us to pass, children, and those young at heart, keen to wave. Vendors tempted us with their wares peering into our gaping windowless chasms, other locals sat just biding their time or peeking from behind their doors but all were near to be seen.

The river boat from Bagan to Mandalay was not as interesting as the train trip from Yangon to Bagan. Bustling along the river that was  a good half mile wide, despite winding our way back and forth avoiding the shallows, we were rarely in touch with the people. Dancing dots on the horizon appeared to be children playing on the bank. Others were attending laundry or fishing nets, just distinguishable in the distance. Photos taken require dramatic cropping to give a feel of the people and scenery around us. River traffic trundled past but was frequently industrialized; clearly not from the villages that periodically line the banks.
On the boat itself there was an on going game of musical chairs as views versus the sun battled for the prized seats first facing one way then the other.  With about 20 tourists aboard (and one local passenger), there was a chance for some chat. Especially as Nicolas and Elise were also cycle touring. Navigating through the sand banks that were intermittently marked, was highly technical.  Two people stood on the bow of the boat elegantly welding depth gauge poles, arm actions directing the helmsman left or right.

Motorbikes are banned only in Yangon, elsewhere in Myanmar they are ubiquitous. Like India, they’re all small, if a little newer in design. Unlike India, there’s an assumption of observation, and a concept of right of way,  so hooters are used sparingly. Sometimes one can hear a motorbike approaching by the voices of the people on it! We’re still trying to take this on, after immersion in India for three months. In Mandalay, it was our voices, as we took motorbike taxis at one point. They also gave us helmets, but had they just got their motorbikes and wanted to practice? The two times we went on the back of Indian’s bikes, helmetless and three up, admittedly in the middle of nowhere, the riders were much smoother and assured, whereas our Mandalay taxis, two times two up, felt a bit wobbly and less secure. Were we paying for their learner petrol?
Our second train trip, Mandalay to Tsipaw, notable for two feats of engineering back in the early 1900s, was also marked by higher levels of sophistication seen in the farming. Although still mainly small scale stuff with every last patch of fertile land cultivated,  the watering cans on shoulders and the ox ploughs had been replaced by rotavators, hose pipes, sprinklers systems and strimmers.
Unbelievably the train jolted to a halt then went backwards. It was plenty slow enough surely it didn’t need to cover some bits twice. It gradually became obvious; as day was breaking we could see the track layers beneath us. We were gaining height up the side of a mountain onto a plateau, the train can’t do hairpin bends, so it had to switch direction for each zig or zag. A panoramic view opened up before us, lined with receding hills.
The second spectacular event was marked by people peering out of the windows and cries of, ‘There it is’. Fleeting glimpses developed into a full view until the train stopped just before we curved round to cross the Goteik Gorge viaduct. Crowds clambered down onto the track for a better view framing the ‘must take’ photographs. 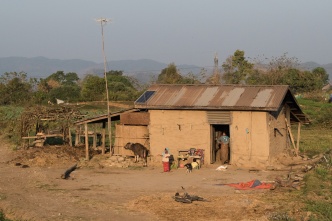 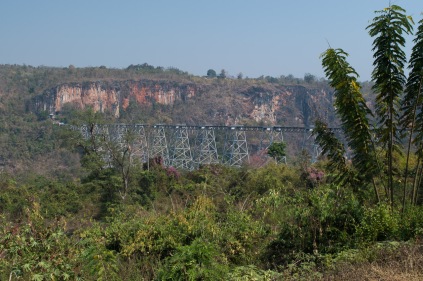 Don’t look down. No, that’s not the road we later cycled, that’s errr, downstream?