‘Down hill all the way’ we were told by more than one person. Gid had pointed out the minor point of the Gokteik gorge, which we’d passed over on the railway’s spectacular viaduct. But once again we were living up to our title, within outdoor pursuits circles, of ‘Southern Softies’ .
At 40km into our 80km trip my legs were knackered from grinding up hills in my lowest gears. Once up on the plateau and greeted by a significant head wind our average speed was still a meagre 10 km per hour.  I was still peddling in middle gears to get down hill! Gid proclaimed he was in his ‘granny gear’ on the flat. I didn’t take umbrage.
At 22km the horizon line looked ominous. In a canoe it would indicate a weir as the river dropped away before you but here, with a dark mountain line in the distance, we’d reached the gorge.
As we started our descent I fantasised that I could see a wide valley through the trees at the bottom as we took a long sweep back along the hillside. I was beginning to wonder if we’d got it wrong. We weren’t going down a gorge but into a valley where we could cycle out the other end over a much lower pass. Dream on!

Looking back at the lower hairpin bends.

(Gid adds: Clare hadn’t seen this then, from the top of the descent)
Initially it was a wide road with sweeping bends big enough for articulated lorries passing in both directions but it quickly got narrower and steeper. Soon there were queues of truckers in both directions at the cutbacks. At one especially tight turn a policeman was in charge, otherwise polite hooting indicated a driver was going to move. The rest tucked in.
We carved a route between them and stopped to quiver at the sight of the road winding up the other side. Our descent taking 40 mins. Disappointingly, we’d not yet glimpsed the famous Gorteik viaduct we’d been across on the train.
The ascent started well. The sections were well graded with long steady climbs. There was only the occasional steep hairpin that required a real effort. We thought we’d reached the top in an hour but then it went on and on, still climbing. Every time we thought we were there, another cafe, and someone hosing down their truck’s brakes (think about what that means), at yet another truckers stopping point would appear.  So the climb went on. At least heading south we got some shade while going up.
It was after 15 km that we yet again had the wind in our faces. And at around that point we finally saw the viaduct. After a further 2km we did indeed reach the top. Gid seemed OK but I was fit to drop. Fortunately a bottle of pop was enough to take me the remaining 2km to the hotel. 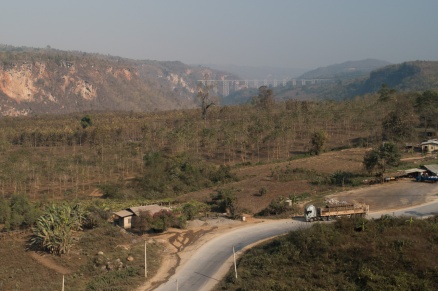 Only 84km, but tough ones. Or rather, 52 miles, as bizarrely, Myanmar uses miles.
Gokteik Gorge road (Myanmar road #3)
40 min. Descent
1hr 40 min. Ascent
Total distance 17 km.
Day two started with even more steady climbing. Very soon we turned left off #3, onto #43. Another 15 km passed before we reached a stretch that could be called undulating.  We were still waiting for the start of the promised ‘down hill all the way’. Gid started swearing, ‘When are we ever going to get to the top of this lot?’. My legs were reduced to jelly.
We’ve just had 5 months of flat cycling across the ‘Stans’ and India. Even the ominously named Snake Mountain, on the way to Pushkar – India, turned out to be little more than a South Downs bump. This was day two of some serious ascents.
We’d been enjoying the more peaceful smaller road, until we found out why. Gorge 2!
Forget the well graded gradients. This was serious stuff. Gid reckoned the steeper bits were 1:3, and kept stopping to let his rims cool – eventually letting his tyres down a bit to avoid explosions (and one old tyre had partially split its sidewall, we noticed a little later). I reckon it was serious shit. Down narrow gravelly hairpin bends where I could barely stop the bike at all I soon lost my bottle and walked! And, gave up all hope of cycling up the other side. 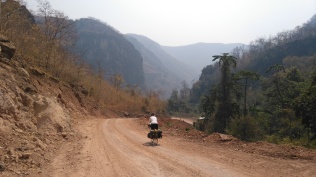 Crossing the bridge at the bottom Gid tried to convince me that beyond the first section the gradients looked better. He flogged up the first part, l pushed my bike from the start.
Trimmed down and super fit Gid did manage a gallant effort but had to admit in the end, that the gradients did not improve. Pushing 45kg of loaded touring bike, even on two wheels, isn’t an easy option but Gid was finally beaten and joined me on two feet.
Just over two hours later we reached the top. Spirits were very low. The hotelier in Hsipaw thought we’d be at Inle lake in two days. We weren’t even half way. Here’s the profile of this leg, provided by doogal. We were just at the third peak.

For anyone trying to (avoid) following in our footsteps, it’s road #3 from Tsipaw to the second peak, then road #43 and #41.

One of many pagodas, linked to monasteries, along the route

It was a second exhausting day but every cloud has a silver lining. Deadbeat, at 6pm after the sun had set, we finally reached a village.

Camping is strictly forbidden. Apart from tribal warfare that continues, blocking certain roads and areas in Myanmar, there are still land mines in the countryside. The first port of call in a village with no tourist accommodation is the monastery. The monks will, apparently, frequently allow you to sleep over night. The locals quickly directed us to the monastery. On arriving there we were greeted by hordes of young monks. Both Gid and I were waiting for an elder to appear but a monk in his late teens directed us to follow two young lads on a motorbike. Little did they know how slow we would be.  They lead us off up the road turning off along a lane to a family home.
We had a lovely supper with the family who were kind enough to put us up for the night. Two English speaking young ladies, teachers from the local school, came to join the crowd. Charades finished, translations started, as we struck up some conversation. The two young ladies also offered a breakfast invitation which we gratefully accepted and were treated, again to traditional Myanmar fare. Just before we left they offered Clare a gift, a beautiful blue green longee. Oh dear, how to respond? Gid dived into a pannier for our tiny gifts; a bell with compass! The lady was a little nonplussed, not having a bicycle, or even, we learned, a motorbike but liked the idea that in time her children would like the bell on a bike. 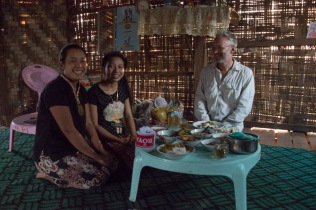 Finally, the next day, the run into Nyaung Shwe on Lake Inle was unmemorable. But when it came to planning our departure, we checked the profiles in advance, and headed west initially, towards the big, flat, river valley that’s the centre of Myanmar, rather than the shorter route south, which turned out to look rather hilly!